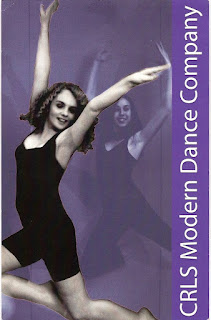 Jim Baker: "That’s why they call them crushes. If they were easy, they’d call them something else.”

Since she as a baby, my daughter has loved music and dance. I don’t know if it’s because she’s grown up in a city with loud music blaring out of neighbor’s windows or because I used to play "The Rockafeller Skank" by Fatboy Slim when I was pregnant and in the delivery room. Whatever it was, she’s has a rhythm I’ve only dreamed of possessing.

I try to encourage it. My daughter started taking ballet classes when she was four-years-old (something I wasn’t allowed to do when I was a girl), I’ve taken her to Boston Ballet performances, and (even cheaper) I’ve brought her to several high school dance recitals. This is our third year we’ve attended the Cambridge Rindge and Latin high school performances. The first year, when my little girl was five, there was a teenager with blonde, curly hair on the stage. My daughter was smitten with her. The second year, we saw the dancer again. During intermission, my daughter told me, “When I go to high school, I want to be in the performances too!”

After this school year began, my daughter constantly asked when there would be another performance. Gently, I explained, “We don’t know how old this girl is. She may have graduated.” We had to miss the first show and I was careful not to mention it. When I was subbing around that time, I saw the dancer in the hallway. I told my daughter that I’d seen her. Brightening, my daughter said, “If you see her again, tell her I want to dance at the high school because of her!” Hmmm, that would be embarrassing so I hoped I wouldn’t see the dancer.

Within weeks, a teenage girl walked into my Social Studies class*. In case I wasn’t sure it was the dancer - she sat down and pulled out point shoes from her backpack. Reluctantly, I walked over and relayed my daughter’s message. I added, “I think she likes you because both have similar hair. “You have a fan!” one of her friends teased while I showed the dancer a picture of my daughter.

Last Friday was the next performance, which, because of the high school construction, was moved to a Harvard Theatre. We ate dinner at home and headed to Harvard Square. When we got to the box office, we were told, “It’s sold out.” Apparently, it’s a much smaller space because the high school never sold out.

Without looking at my daughter, I knew that her eyes were already welling with tears. I’d have to act fast or she’d be hysterical, so I pulled her to the side of the window and hugged her. “We can try to come tomorrow,” I soothed. Except that my in-laws and nephew were visiting the next day, so I didn’t know if that would work. I tried calling my husband to see what he thought about going the next day. A woman saw my distraught daughter and asked if everything was okay. I said that my daughter was disappointed. “Can’t they make an exception?” she asked. “Fire codes,” I reiterated.

I returned to the box office window and asked what time I could come to get tickets the next day, since I couldn’t (inexplicably) get them the day before. Then I happened to mention that my daughter was anxious to see the show because she had a favorite dancer. “Who’s the dancer?” she asked. I gave the name (I only knew it because I had the girl in my class that one time). “That’s my daughter!” the woman exclaimed, surprised and flattered. She asked if my girl would take her ticket and then she’d smuggle me in, since she was thinking of sitting backstage anyway and she still had to man the ticket counter (to tell people that they couldn’t get tickets). After a couple of minutes of working out seating, my daughter and I were seated and we watched the show.

My daughter made me check the program to see which dances would feature her favorite dancer. As each dance with her favorite dancer would begin, she’d whisper, “There she is!” or “I see her!” During intermission, the mother asked if my daughter wanted to meet her daughter after the performance. I think you know that answer to that.

After the show, we waited in the lobby, and my daughter was in awe of all of the dancers who milled about - they were easy to spot because they had on more makeup than everyone else. Finally, the dancer came over. It was a little awkward for everyone. The curly-haired girls shook hands. My daughter said, “You dance great.” I was relieved that she forgot to ask for an autograph.

There are the females we wish to be. Perhaps they’re a prettier version of ourselves. Or maybe they’re so different from us that all we can do is look on in awe. Has this happened to you?

My female protagonists are always awkward (I wonder where I get the raw material for that idea?) and there’s always some fabulous female that either coaxes them out of their shells or they play the perfect ice princess. Girls - big and small - observe other girls, strive to be like other girls, envy other girls, compete with other girls, dismiss other girls. Do these complicated relationships between females appear in your manuscripts?

I didn’t analyze the dynamics between girls’ relationships I'd created in my manuscripts until the “situation” at the performance. In this female dancer, with the blond, bouncy curls, my daughter sees an appealing older version of herself. And it’s not a bad or unattainable goal. My daughter’s crush dances well, does well in school, and seems like a nice person. She’s a pretty good role model.

Here’s a post that demonstrates what a mess I can be:

Posted by Theresa Milstein at 2:00 PM