Last week I sniffled from a stupid cold. And it was cold out—some sort of vortex, which I think means “end of the world.”
My calendar read “Rebecca Stead—Lesley—7pm.”
A half hour before I was due to leave, I felt like the best friend, Cameron, in Ferris Bueller’s Day Off.

One of my favorite books is When You Reach Me by Rebecca Stead. It’s a book I’ll often mention when people think they’re too high brow to read middle grade.

And she would be only 20 minutes down the road.

Just like Cameron, I eventually went. I just hoped I didn’t wind up wrecking a Ferrari in the end. Because I drive an Outback, I had a 50% chance of not destroying a Ferrari. (I think that’s how probability works.)

My car GPS sent me to the wrong building. No matter. I used my phone. The cold made my phone die in two seconds. No problem—I’d ask the one person walking down the street on this frigid night.

She didn’t know where it was either.

Undaunted, I continued on. I found it! And they were selling books, so I could buy more copies to have autographed. 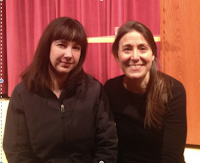 I'm lumpy under 3 layers next to Rebecca.

Rebecca Stead was lovely. After she read from her book, she took questions. She was honest about what she sees as her writing weaknesses and she was happy to share her journey.

1)   She takes a long time to complete a rough draft. It’s a process she’s learned to come to terms with. Forcing herself to write everyday doesn’t work for her. Sometimes she takes time off in between chapters. She handwrites during the day and types at night, so she’s not tempted to keep revising what she’s already written.

2)   She’d worked in law. Then she had kids and changed the job she had at the firm. It wasn’t a good fit for her. So she quit, thinking she’d find something else in a few months. Since she liked to write in the past, she decided to pick it up again. Her favorite books had been her childhood ones. She reread them and then asked a bookstore employee for new book recommendations.
3)   While working full time, she’d taken a class at the 92nd Street Y. A woman whose day job was editor took the class too. Rebecca and the woman hit it off.

4)   When Rebecca finished her first draft a year after reading those books, she sent it to the editor. The woman advised her to find other writers to learn how to structure a book.

5)   Rebecca made this very challenging at first. She and a few writers traveled through states once in a while to critique each other’s manuscripts. The process took her two years.

6)   She sent the manuscript back to the editor.
Good news: she loved it.
Bad news: it needed another year of revision with the editor.
That was First Light.

7)   After that, she wrote When You Reach Me, which one a Newbury. Then she wrote Liar and Spy. Now she’s working on her fourth novel.

I had an epiphany when I heard Rebecca speak. She knows it was luck that started that relationship between her and this editor. But the rest of it—the two years revising—was her hard work.

I’m going to confess: I’ve never spent 2 years revising a manuscript. I write it. I revise it. I hand it to people. I revise it more. I give it to more people. When the comments seem to be few and far between, I polish and query. This usually takes 1 year or less.

When I’ve queried it some number of times (which includes making changes based on rejections), I put the manuscript away and move on.

Part of me knew this already. I’ve found a few writers who have started critiquing something newer. They’ve given me more thorough critiques than I’m used to. Now they have my middle grade. A few months ago, I queried it sort of by accident. I hadn’t planned on querying it yet, but I stuck in on a forum to get feedback and an agent requested it. Then I pitched it for a contest. That got more agent interest. I received some nice comments, but they passed.

This manuscript had great meaning for me. It’s more than just an interesting premise. I want to give it every opportunity to succeed. So I’m bracing myself for the hard feedback to find out what’s wrong with it.

So I can make it better.

If I revise based on my group’s suggestions and I still don’t land an agent, then I’ll plan another course of action. Maybe that means hiring an independent editor—something I’ve been reluctant to do.

If I don’t believe in my story enough to make it the best it can possibly be, who else is going to believe in it?

I’m glad I braved a vortex, address issues, a dead phone battery, and a stuffy nose to meet Rebecca Stead. I got to tell her how much I loved her book. I didn’t expect to walk away with an epiphany, but you can’t really plan for those, can you?

Posted by Theresa Milstein at 6:57 AM 42 comments:

Email ThisBlogThis!Share to TwitterShare to FacebookShare to Pinterest
Labels: Rebecca Stead, When You Reach Me, Writer 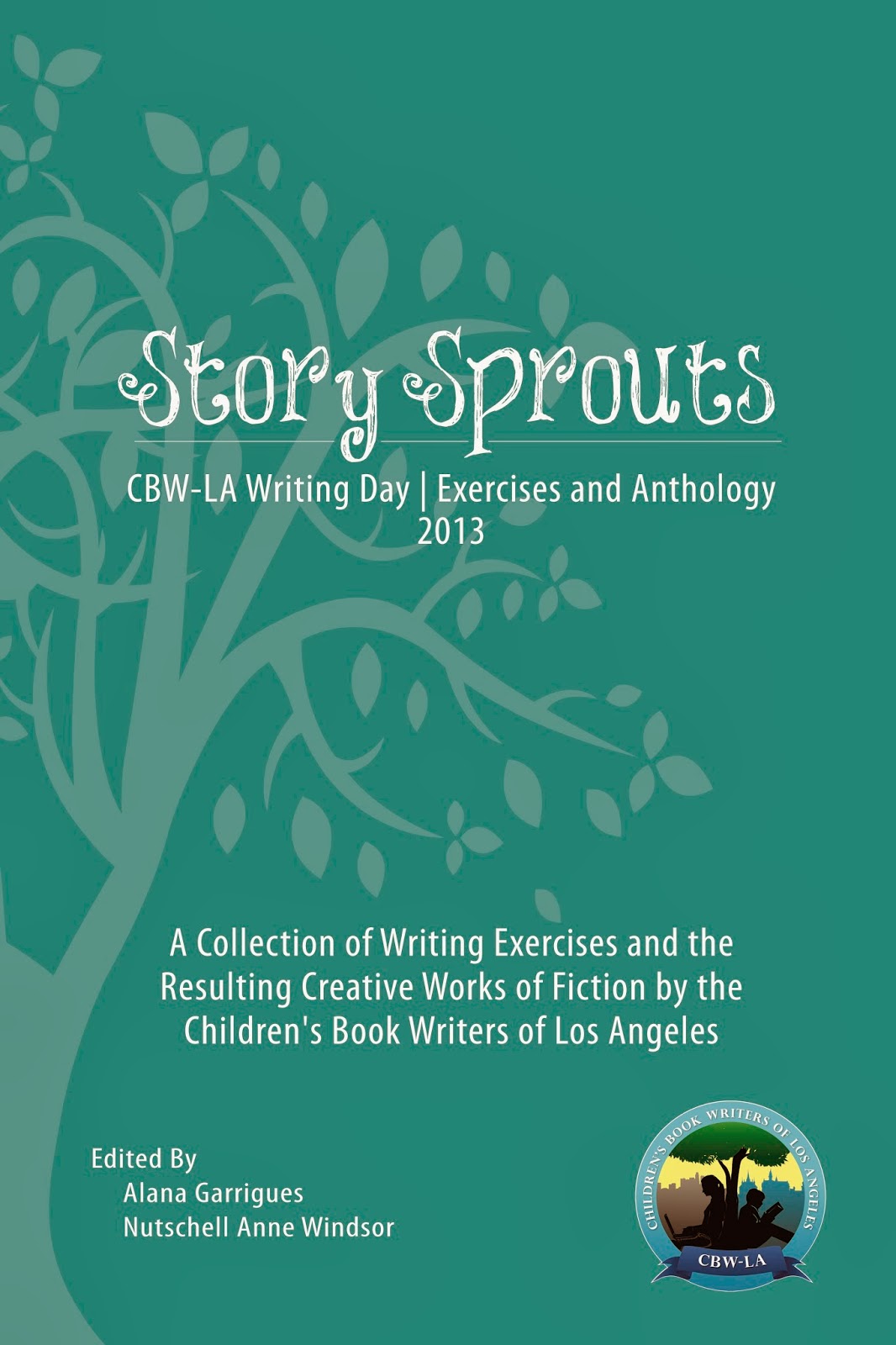 Guest Post: The Writers' Workshop - From Blank Page to Published in Six Hours

Since we know all you Theresa blog readers are a nice mix of writers and teachers, and chances are you're all getting back to work after a bit of repose, Nutschell Anne Windsor and I wanted to share our experiences teaching and creating a little book for teachers and writers called Story Sprouts, released in October. Story Sprouts is a compilation of stories written by published and aspiring authors during a writing workshop. A one day writing workshop. Actually, a six hour writing workshop, with two finished pieces per author, created entirely in the moment.

How did we do it?

We did it through - planning, planning, planning. A fun mix of fiction and non-fiction. A lot of encouragement. Coffee and plenty of food. Professional copy and lay-out editors. And a few great exercises to help our writers' minds pop with ideas and revise with ease.

We started with some simple mindless exercises to warm up the writing muscles and built up to serious plotting and revision.

While the Writing Day Workshop Anthology was the result of a Children's Book Writers of Los Angeles (CBW-LA) board brainstorm, President and Founder Nutschell truly earns all the accolades for the agenda of the day. A former English teacher and aspiring YA author, she took her teaching prowess and her impeccable research on the writing life and put together ten clear-cut writing exercises for nearly 20 attendees.

Post writing day, my role as Publications Editor was to translate the workshop into a narrative form and do a preliminary copy edit as well as some minor line edits in the pieces - just to make sure each writer's voice was as consistent as possible throughout his/her entries. Very minor tweaks to help our writers shine.

The rest of the CBW-LA board researched editors, raised funds to support the endeavor, planned festivities and made sure we had their full support!

The book includes all ten writing exercises from the workshop, along with explanations of why we selected them, and the 38 anthology entries. Half of the entries are reflective pieces on writing, and the other half are based on afternoon photo prompts and revision exercises.

We encourage any teacher or writer to pick up the book - available on Amazon in Kindle or print form - and share it with the students or writers in your life. (Bonus - through January, we are donating HALF of all sales to Philippines disaster relief after last year's supertyphoon!)

We would love to hear about how you use the exercises in your classroom or to boost your New Year writing goals, and encourage you to contact us if you have any questions about planning a similar workshop in your hometown. If you are in the L.A. area, please join us in May for Story Sprouts 2014, with all new writing tips and prompts!

In the meantime, keep on writing and revising!

Alana Garrigues is a freelance journalist and creative nonfiction author. Originally from Portland, Oregon, she now lives the sunshine life in Redondo Beach with her husband and identical twin daughters.
Alana is an avid traveler, meticulous researcher, terrible housecleaner, incessant daydreamer, nature lover, and dabbler of all things art-related. She is also the Publications Editor for CBW-LA and author of the Writercize blog where she posts original writing prompts for writers, students and teachers (writercize.blogspot.com). She is also a member of the Association for Writers and Writing Programs (AWP).
Visit www.alanagarrigues.com for more information. Also on Facebook at www.facebook.com/AlanaGarriguesWritesand Twitter @alanagarrigues.

BLURB:
What happens when linguistic lovers and tale tellers workshop together? Inspiration. Wonder. Discovery. Growth. Magic.
Brave and talented, the writers featured in this anthology took on the challenge of dedicating one day to the raw and creative process of writing.
A rare view into the building blocks of composition, Story Sprouts is made up of nearly 40 works of poetry and prose from 19 published and aspiring children's book authors.
This compilation includes all of the anthology writing exercises and prompts, along with tips, techniques and free online writing resources to help writers improve their craft.

Posted by Theresa Milstein at 5:31 AM 27 comments: