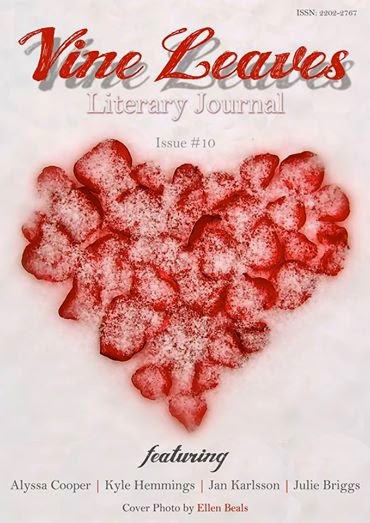 Vine Leaves Literary Journal has had a few staff changes.

Dawn Ius, co-publishing editor with Jessica Bell, has recently stepped down. The blog post about it is HERE.

Jessica has needed to do some new hiring. The Vine Leaves staff is posted HERE.

Since Vine Leaves started in 2012, I’ve been an avid reader. The journal introduced me to vignettes and got me writing them too. My piece “Left Behind” was published in their April issue and in their Best of Vine Leaves, 2012. They also published my poem “Catty-Corner” in their July 2012 issue.

In the last month, I’ve performed a few tasks:

The 1st task was to set up a Pinterest page. I’d be thrilled if you’d visit, especially if you followed it too. Here’s the LINK.
Please click it and tell me what you think.

My 2nd job was to vote on the shortlist poem for the April 2014 issue, which is coming soon.

And now my 3rd assignment has been to read the 2014 quarter-finalist list for The Annual Vine Leaves Vignette Collection Award and help choose the semi-finalists and grand finalist. Details about the contest are HERE.


It’s been a rewarding month for me, but I’m adding it to my list of items to juggle:

Family (is a priority always)
My job (gives me satisfaction… and a paycheck)
Special Education classes (are a lot of work but will be done soon-ish!)
Writing: (fulfilling-frustrating-need it like breathing)
Editing (it’s a learning experience and rewarding)

This gives me 5 items to juggle and I’m horribly uncoordinated. Have you seen me dance?

But I won’t let that happen, right?

So the only downside is that I can no longer submit my pieces to Vine Leaves. It’s totally worth it.

What are you juggling now?
Are all your balls in the air or are you dropping any?

Posted by Theresa Milstein at 7:18 AM 74 comments:

Worst Idea for a Novel Ever

(Don’t leave. I swear—it’s not just a post where I’m sharing my dream. Mostly.)

And this teenage girl has a pizza. She wants to put it in storage on the Long Island Railroad while she rides home, but they want to charge her $30. So she decides to hold it.

(I agree, not a great opener. While I appreciate her not wanting to spend $30 on really what should be a free service, I don’t see where this dream is going.)

She reaches her stop and walks home with the pizza in hand. She meets a boy. He’s complaining about his lousy job. They walk home together and fall in love.

(While this dream still isn’t compelling, both appreciating a New York pizza is as good a reason to start a relationship as any.)

I already know, as I’m watching these people that he’s going to get too clingy and she’s going to break up with him. He’s going to take this badly and decide to kill her.

He’s chasing after her. She decides to run home so her dad can help. He’s a cop. Normally, father and daughter don’t get along, but they’re really going to bond when he kills her stalker, psycho ex-boyfriend.

She runs home. Dad shoots ex-boyfriend in the chest just in time. The boyfriend turns into a female. She’s got a look of surprise (from being shot or changing gender, I'm not sure) and keels over.

I think the story can’t end like this because my main character hasn’t done much to drive the plot, so the woman isn’t going to die. She’s going to chase after her and they’ll have a showdown.

In my dream, I actually say, “And this is how you plot a novel, people!”

(*Cue scratched record sound* Now this dream is a novel? Did dreaming-author me not just notice that the ex-boyfriend turned into a girl? She got shot in the heart, so how’s she going to pursue my main character? It seems my “novel” has plot holes the size of continents.)

My main character (MC) is crying, apparently because now her father is dead. (Another plot hole. When did this happen??? Is this a Quentin Tarantino film where everything is out of order?) The boyfriend who is now a girl grabs the gun and points it at my MC. MC takes a little too long but finally runs away. Boy-turned-girl pursues MC.

MC winds up in a flea market. She’s dodging booths, crowds, ducking under tables. All the while, the ex-boyfriend turned girl is calmly walking with the gun pointing in plain sight and a tank top covered in blood along with a bullet hole.

The MC sees a guy who’s wearing stilettos, but otherwise looks pretty tough. Turns out she knows him. He’s a gun owner. She knows she can borrow a gun from him. But first he introduces her to his three kids.

(So that’s my climax twist? She happens to see someone who owns a gun, which means he’ll have the gun on him and give it to her?)

Now I don’t even know how the novel ends.

But I’m fired up. I’m going to write this novel down that has written itself!

I start reviewing my stellar plot in my mind and reality sinks in.

I turn over and go back to sleep.

You writers who have these dream epiphanies--I’m impressed because my subconscious is this bad.

How would you end my novel-dream?

Posted by Theresa Milstein at 3:38 AM 61 comments:

Last summer,  Old Kitty  posted about Neil Gaiman’s writing prompt in The Guardian.  I saw the post too late, but the prompt stuck in my head:

It wasn't just the murder, he decided. Everything else seemed to have conspired to ruin his day as well. Even the cat.

My story definitely isn’t MG or YA. But it was fun to write. It's short and not very sweet. Enjoy!

It wasn't just the murder, he decided. Everything else seemed to have conspired to ruin his day as well. Even the cat.

While the radio murmured about war, government corruption, and other normal injustices, he sipped coffee from the mug in his right hand while the other held binoculars peeping between the blinds. If his ritual went according to plan, the caffeine and the woman dressing for work in the apartment building across the alley would wake him up.

Just as she danced into the bedroom—he always imagined some sexy song from Madonna blasting—and removed her towel, the cat jumped unwelcomed onto his lap. He startled. If the feline’s claws on his genitals hadn’t been jarring enough, the coffee searing his lap soon ruined any further opportunity for arousal.

By the time he’d ripped off the soiled pajamas, rubbed soothing lotion on his sore skin, and changed into new clothes, the woman had left for work.

He’d gone even grumpier than usual to the repetitive job he despised. The doctors sent bills. He made a charade of investigating for fraud, but everyone got paid in the end. If he ran the company, corruption would stop. But nobody listened to people who slaved in cubicles.

When he walked through his doorway after work, he kicked the whining cat out of the way. Everyone wanted something from him.

There would be one last chance to unwind from his sorry day when she undressed for bed. There’d be no towel. No dance. Her moves would be slower and the removal would take longer. But he’d have his moment to imagine she was his.

He sipped his glass of cabernet with his right hand while his left cradled the binoculars peering through the blinds. He’d locked the cat in the closet to prevent a repeat of that morning’s sin. Nothing would interfere with his nightly ritual.

She shuffled into the bedroom, clearly as tired as he felt. He imagined her enduring a job in customer service. If only they could converse about the injustices that led to their lousy day. She would listen. She would understand.

He watched her gaze at her reflection in the mirror, but she couldn’t see him gazing at her. He inhaled, drawing the imagined scent of the perfume on her bureau inside him. As she removed her bracelet, he sat up straighter. She unclasped her necklace. He set down the glass.

That’s when an intruder stepped out of her closet, gun in hand. She noticed the intruder in the mirror’s reflection at the same time he did. Her mouth formed a perfect O as she whirled around.

No! Not his woman. He jumped up, spilling the wine while the intruder closed the curtains across the alley.

He stared at his bleeding pants as the gun fired.

Night was shot too. And what would he do to occupy his time during tomorrow morning’s coffee?