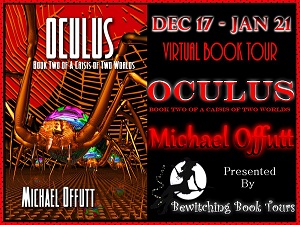 One of my favorite bloggers, Michael Offutt, is a talented writer and illustrator.  He has an EPIC blog tour going on now.  He’s offering a free short story.  You can also win bookmarks and signed books.  You can even win a $50 Amazon Gift Card!  Read on to find out more.

The tired clichés that I break in Oculus by Michael Offutt

There are many clichés in fiction, so I set out to break a few of them in my writing. I do kind of wonder if it will annoy readers or not. Thus far, the reception has been great. Anyway, I’ve compiled a list of things that I tried to do differently with Oculus. Here they are:

1)    All jocks are stupid. In Oculus, Jordan is a jock, yes, but he’s also incredibly smart as well as loving.
2)    All gay guys are really promiscuous and sleep around. Jordan is happily monogamous with his boyfriend, Kolin.
3)    All gay guys are effeminate like Kurt in Glee. Not true.  The only difference between Jordan and a straight guy is who he sleeps with at the end of the day.  That’s just his identity, and he’s comfortable in his own skin.
4)    Every Excalibur story has basically been told. Not true. I think by the time I get done, people will say, “I never thought of this angle on the whole Excalibur myth.”
If you would like to check out more about my books, please visit my page below:
http://slckismet.blogspot.com/p/books.html

Also each stop can give away a bookmark, also open to international shipping. Please choose a winner and send me the name, email and mailing address.

Autumn has arrived in New York, and Jordan Pendragon attends his first classes as a freshman at Cornell. Born with a brilliant mathematical mind, he balances life as a research assistant with that of a student athlete.

But Jordan also has a quest. He must find the Black Tower, a monolithic edifice housing a thing that defines the very structure of the universe. Jordan believes it is buried somewhere in Antarctica under miles of prehistoric ice.

October finds Jordan earning a starting position with the Cornell hockey team. But a dark cloud gathers over his rookie season. Unexplained deaths, whispers of a cannibal cult, a prophecy, and a stone known only as the Oculus, cast a shadow over his athletic ambitions. It is the start of a terrifying journey down a path of mystery, murder, and to a confrontation with an Evil more ancient than the stars. 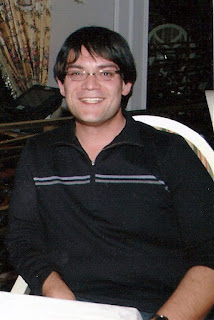 Michael Offutt writes speculative fiction books that have science fiction, LGBT, and paranormal elements. His first book, "Slipstream" has received some critical acclaim and was published by Double Dragon in the spring. The sequel, "Oculus" came out in November 2012. He has one brother, no pets, and a few roots that keep his tree of life sufficiently watered. By day, he works for the State of Utah as a Technical Specialist. By night, he watches lots of t.v., writes, draws, and sometimes dreams of chocolate.

Michael Offutt graduated from the University of Idaho in 1994 with a Bachelor's degree in English.

He keeps a blog and would appreciate a visit or two even if all you want to do is say hi.


One lucky commenter will win a bookmark.  Good luck!
Visit Michael's blog and leave a comment
to be included in the $50 drawing!

Posted by Theresa Milstein at 6:32 AM