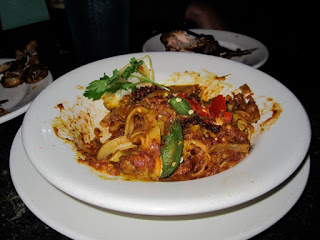 If you read yesterday’s post*, you know I went to Hell Night. The place was decorated and the staff dressed up for the occasion. We started off with a deviled egg Russian roulette, which means that everyone at the table got a deviled egg, with heat on a scale from two to eight. I think my egg was a six or seven, but just about everyone thought they had a spicy egg. Then we moved to a plate of chicken wings, which were seven “bombs”, and I realized that my egg was nothing. My lips and the skin around them burned, as did my mouth, for many minutes.

My main dish was five bombs, but I removed the sauce from my sirloin so I could eat it (I’m a closet wimp). My husband ordered the “Pasta from Hell” (nine bombs) for the table, and the three who ate it (not me) had to sign a waver. Even the toughest ones got red, glistening skin, and ate just a forkful or two. For the couple of hours we were there, I only heard one chant of “Wimp!” which spread throughout the restaurant.

Although I got to bed by 10PM, eating a big spicy steak with drink is not a good way to spend an evening before a two-day sub job in the fifth-grade. I received the call the night before, to report to the same school I’d just worked at on Tuesday, when I was in charge of the third-grade class. This year, I’ve almost exclusively reported to the same three schools, and now that I’ve subbed a while, I’m getting repeats of the same jobs. This teacher was one I subbed for once last school year. He was a floater teacher, working in two fifth-grade classes, teaching Math and Social Studies. So I thought I knew what to expect.

Turns out he now has his own fifth-grade classroom. I worked in fifth-grade classes for years, so, unlike Hell Night, I thought this would be no sweat. In the back of my mind I also thought of my son’s class having his building substitute on Monday. Two students stole the sub’s $300 phone. They confessed on Tuesday, and now have been rewarded with a week of in-school suspension. By fifth-grade, students can be known to treat subs terribly. I pushed down the anxiety, reminding myself that I was tougher than that.

The group who first came in seemed wholesome enough, following the rules on the board. Some others came in, a little noisier, but nothing I couldn’t handle. When it was time for morning meeting, we all sat in a circle around the rug, and after greeting, students could share. The first person brought up the earthquake in Haiti, and I learned that three students were of Haitian descent and had family members still in Haiti. Two of them knew of family and friends who died, while one hadn’t been able to reach anyone. The discussion was poignant when a small boy raced to the rug; the size of a second-grader, with glasses and eyes that made me think he was either mentally impaired or had been a preemie. He couldn’t stop talking and was all over the place, making the boy I worked with yesterday seem in control.

This boy needed a lot of support all day, but there weren’t four teachers in the room all day, like yesterday. Sometimes I had help, but other times I did not. Luckily, an assistant I worked with at my former school kept watch on him every time she was in the room.

After lunch, the students had “Know Your Body”. I was supposed to stay while an outside teacher ran the class. Listening to the topics: menstruation, sexual intercourse causing pregnancy, ejections, and nocturnal emissions was a little strange, although I’ve been in the room for these topics before. Even stranger were the handouts scattered about with penises on them (I preferred their worksheets on decimals). It’s important that they’re informed because they’re on the threshold of dating, although they don’t look like it. Hearing their questions let me know that they took it seriously and that they had been in the dark about most of it.

One student’s last day would be tomorrow, and some students had written a play they wanted to perform for her. They also wanted the other fifth-grade class to come in. The absent teacher hadn’t planned anything special, so the assistant ran out to get cupcakes during her break. I was weary of letting them perform the play (as were the other instructors), but the students promised it would only take twenty-minutes. Letting them rehearse during lunch, I thought the play seemed tame and cute.

It took some time to get the audience to settle, but when they did, the play began. It was silly and made the students laugh, but at some point, a few actors ran around the room (improvisation gone bad), creating mayhem. All five teachers had to calm them. I was mortified by the whole spectacle. The play resumed without incident, and dragged on for about thirty-minutes in total. I decided to put off the cupcakes until the next morning, giving them a talk about expectations for behavior instead.

Afterwards, the other class left, and my class put everything back where it belonged, and got ready to go home. I was glad that it was over, but had a little anxiety since I’d have to give another performance to a tough audience tomorrow.

Posted by Theresa Milstein at 2:21 PM

Email ThisBlogThis!Share to TwitterShare to FacebookShare to Pinterest
Labels: Teacher