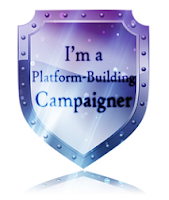 Rachael Harrie is hosting a First Campaigner Challenge.
The requirement is to begin with, The door swung open…

Here’s my attempt at exactly 200 words: 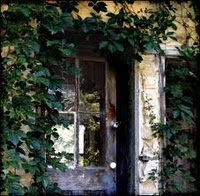 The door swung open. I lit a candle from the mantel and entered the dark cave. The door swung shut, making me jump. I tugged the knob, but it wouldn’t budge.

With each tentative step, I cursed the factors that led me to this predicament. One, I was home alone. Two, I was bored. Three, the fireplace's jutting stone compelled me to press it. Four, my parents wouldn’t return for hours. Five, what would happen when the candle burned out?

Step six led to a set of stairs, too deep to see to the bottom. I took a step. My racing heart didn’t match my slow descent. My parents would never hear me from so far down. But something compelled me to go on.

As soon as I reached the landing, I inhaled the aroma of food. How could that be? Ahead, I spied light. Blowing out the stumpy candle, I followed the scent and ignored my stomach’s cries to flee.

I heard the merriment from the waxy-skinned youths before I absorbed the sconce-illuminated room. A spread more impressive than Thanksgiving stood before me. I entered the room. The door swung shut.

“Join us in the never-ending feast.”

Posted by Theresa Milstein at 5:47 AM