Phoebe: Come on, you don't think we'll be 60 and still living together, sharing clothes and a cat.

Piper: Well now that you put it that way, no, I don't want to live with you anymore.

Talli Roland is having a Watching Willow Watts book launch TODAY! Since I love alliterations, I wanted to participate.

Willow Watts lives a predictable and dull life. A You Tube video, in which she bears a striking resemblance to Marilyn Monroe, propels her to stardom. Will Willow lose herself in the process?

Now is your chance to make your superhero, film star, or Rock God fantasies come true. 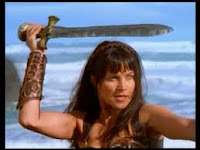 In the 1990s, I loved the TV show Xena: Warrior Princess. While she might have had chemistry with a guy or two, she didn’t depend on a man. (Do you hear me, Bella?) She could FIGHT. She was FIERCE.

In homage to her, I’ve named my GPS, Xena: Warrior Navigator. 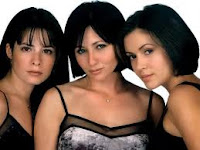 The 1990s also brought the TV show Charmed, featuring brunette sisters. Sure, there were attractive love interests. But what made the show great was the dynamic between the sisters.

Though they didn’t find out they were witches until they’d reached adulthood, they were pretty prepared. Prue had an art history degree, which helped her figure out where ancient relics originated and how to decipher the writing. Piper was a chef, so she could whip up potions like nobody’s business. They’d obviously taken martial arts because they could take down any badass demons that dared to mess with them.

Their powers were pretty cool. Prue hurled objects and people. Pipe froze objects and people. And Phoebe had premonitions. Since she didn’t have an active power until later (levitation), the martial arts became especially important. When the sisters combined their powers, they were a formidable force.

Phoebe: I'll do what I should've done a while ago which is vanquish your sorry ass. 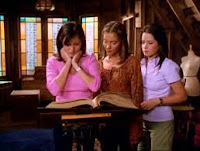 When they're not vanquishing demons, they read.
(Did you notice Prue's shirt is the color of Talli's new book?)

While I may be dark-haired like these heroines, I’m not physically strong. I can’t wield a sword. I’m don’t have any magical powers (which irks me). Xena: Warrior Princess and Prue Halliwell possess strength I admire. On the upside, I don’t constantly have enemies after me.

Prue: I mean, well, you are a warlock magnet.

You can buy Watching Willow Watts:

In PAPERBACK (coming in November)

Other If I Could be Anyone… POSTS.

And don’t forget to enter my CONTEST!

Posted by Theresa Milstein at 2:28 AM