I took a couple of pictures, which came out weird. I’m sure she’ll
appreciate me using one from the Candlewick site instead.

One of my critique group members, Edith Cohn bought tickets for us to see a screening of “Because of Winn Dixie” at the Somerville Theatre. Then I won four tickets from The Official Kate DiCamillo Page on Facebook. The librarian at my children’s school had an extra. So my whole family, including in laws, got to see Kate DiCamillo read the beginning of Because of Winn Dixie and do a Q&A, and view the movie. Woo hoo!

I have to explain my admiration for Kate DiCamillo.

We read Because of Winn Dixie in my fifth-grade reading group, and the students loved the book. Reading it gave me a greater understanding of voice. This summer, my daughter and I listened to the audio book on the way back from New York. Near the end, I had to drive through Connecticut with teary eyes.

My son enjoyed it when I read A Tale of Despereaux aloud. Kate DiCamillo defining a word (perfidy) in the text motivated me to define important words at the beginnings of chapters in my manuscript Muriel and the Misfits. The manuscript didn’t go anywhere and it was probably a bad idea. But still, the author had inspired me to try something different.

I saw an autographed copy of The Miraculous Journey of Edward Tulane at Porter Square Books and picked it up since I liked her other two books. This book blew me away. I wasn’t expecting it. It touched me in a way that few books touched me. I cried. Twice. It’s on my top ten list of favorite books. Maybe top five. Read it. Now. Go! 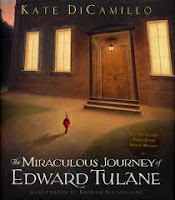 Kate DiCamillo admits to receiving nearly 400 rejection letters for her short stories (and piercing each one with darts). But her first novel Because of Winn Dixie was quickly accepted. And it won a Newbury Honor. Her first book. Impressive, no?

Edith snagged us seats in the third row, right in the center. I held onto five seats for my family on the side. While waiting, I was amazed that even though the event took place in Somerville, Cambridge was representin’. I spotted three girls from my daughter’s class, the librarian from my kids’ school and one from my old school, a child and dad from my former babysitting coop, and a girl from my son’s class with her parents. The last one didn’t surprise me since the mom is an editor at Candlewick Press , the publisher of Kate DiCamillo’s books.

When it was time for Ms. DiCamillo’s Q&A, it was obvious she had been a teacher. The woman seemed as comfortable on stage as she would be in her living room. She took questions from the audience (But not my daughter, even though she had her hand raised the ENTIRE time. Her question was, “Are you going to write another book about dogs?”), and answered with wit, humor, and honesty.

When asked by a child which book was her favorite of the ones she’d written, she called on the kid’s mom to choose a favorite among her children. Kate DiCamillo then explained that each book was like a child, special in its own way, so she couldn’t have a favorite.

She admitted she doesn’t know how to write a book without an animal in it. I could relate because all my manuscripts have fantasy element to them. Anytime I try to go real world, I become bored and abandon the piece.

Her advice to children and adults who want to be authors was to write a little everyday and read all the time. (check, check.)

Ms. DiCamillo said she’d been complimented on her writing in college, so she bought turtlenecks and called herself a writer without actually writing. By age 30, she realized that wasn’t going to get her published. Although she didn’t say it during the Q&A, she faithfully writes two pages a day, five days per week. In ten years, she has about eleven books published, from novels to picture books to early readers. She’s one prolific chick!

A parent asked about The Miraculous Journey of Edward Tulane, “It’s one of the best books I’ve ever read. Did you write it for children or adults?”

Kate DiCamillo asserted the book wrote itself. She was given a creepy rabbit doll from a friend, who said it was named Edward. She had a dream about the rabbit at the bottom of the ocean, and wondered how it got there. As she wrote the book, she felt like she was just the messenger. It was a gift.

and a National Book Award finalist

I remembered her answer to an earlier question, “Which book was the easiest to write?” Her answer was Because of Winn Dixie because there were no expectations from her publisher or readers. She could write without worry.

We writers are a neurotic bunch, and that probably doesn’t change when writing a new manuscript, no matter how many came before and how successful they were or weren’t.

After being introduced and called a role model, Kate DiCamillo said she didn’t want to be own it because it was too much pressure and she’s made too many mistakes. But she would accept being a role model for trying really hard.

Sorry, Kate DiCamillo. As a writer, you’re a role model to me.

Have you read any of Kate DiCamillo’s books?

Let me know your thoughts.

Posted by Theresa Milstein at 12:59 PM