Needing Dark to See the Light 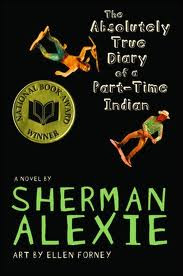 There’s been much hullabaloo over the Wall Street Journal article "Darkness Too Visible" by Meghan Cox Gurdon about YA being too dark.

Sherman Alexie’s article, "Why the Best Books are Written in Blood"

My son read Alexie’s YA book The Absolutely True Story of a Part-Time Indian in 5th-grade when he was 11 years old. I knew it had brutal content: poverty, sexual and physical abuse. But I also knew that it had moved a few of his classmates, who recommended it to him. He said, “it was sad, but it had funny parts too”; he in turn recommended it to his friends. And he told me his then 7-year-old younger sister wasn’t ready to read it yet.

I trusted my son’s judgment, just like I trusted his 5th-grade teacher for providing the book. While my son read the story, he shared it with me, and we had several mature discussions.

I agree with Alexie:

On Friday, I told a class of 7th-graders (ages 12 and 13) about the World Street Journal article, especially the part about the woman who supposedly couldn’t even find a wholesome YA cover, so she walked out of the bookstore without purchasing anything. (Hadn’t she ever heard the adage, “Don’t judge a book by its cover”?)

They made excellent points.

I think Alexie has a good response for them:

“And now I write books for teenagers because I vividly remember what it felt like to be a teen facing everyday and epic dangers. I don’t write to protect them. It’s far too late for that. I write to give them weapons–in the form of words and ideas-that will help them fight their monsters. I write in blood because I remember what it felt like to bleed.”

Last fall, these 7th-graders read Speak by Laurie Halse Anderson in their ELA class. They were incredulous that it’s been banned. They laughed at the ludicrousness that Harry Potter has been banned. They admitted that nobody bothers monitoring their access to the Internet, movies, or TV that has inappropriate content. They acknowledged that they see horrid things on the news, where it’s not explained. They told me books help them understand their world, so why would anyone want to take them away? They wanted to know why anyone would want to stop them from reading?

My son may be lucky enough to not ever have to face the darker reality YA uncovers, but neither should he be ignorant about it. I’ve always provided my children with books to help them prepare for difficulties, whether it be visiting the dentist or enduring the first day of kindergarten. As they get older, the preparation may be less wholesome but no less vital. Sometimes we need darkness to see the light.

"There is no such thing as a moral or immoral book. Books are well written or badly written. That is all." - Oscar Wilde

Posted by Theresa Milstein at 8:42 AM