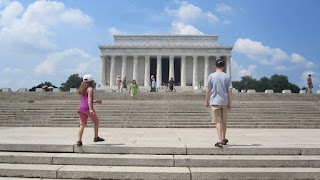 "I can’t go back to yesterday, I was a different person then."

There are levels we reach as writers. Some scale the steps, while others stay on one step for what feels like f o r e v e r. But take heart because there are ONLY 10 STEPS:

Started a manuscript. Maybe finished it. Don’t know what to do. Start a blog? Buy a how-to book? Join a group? Contact that cousin who’s brother-in-law’s uncle’s cousin is an editor somewhere.

Or was he an agent?

Watched “Julie and Julia”. Realized how it easy it is to gain a zillion followers without following anyone in return and get some TV time. Then the publishers leave messages on YOUR machine.

And it only takes 1 year.

How do I get my blog to come up on Google? It’s been two weeks and I only have 3 followers, 4 if you count that I’ve followed my own blog by accident, and don’t know how to unfollow. At least my sister left a comment on one of my posts.

When will non-family members find me?

Need to have a Twitter Account? Facebook? Tumbler? Linked In? Goodreads? AND blog? Don’t they know I have a full-time job? No matter. My cousin's brother-in-law’s uncle’s cousin is going to get that manuscript any day now. Full-time writer with a big, fat advance here we come!

I don’t have to follow all these people back, do I?

All these agent and editor blogs make it sound REALLY HARD to get an agent, let alone a publishing contact. And there are all these RULES. Apparently, I wasn’t supposed to send the same query to 50 editors at once. Oh, and I’m not supposed to ask hypothetical questions in queries. Oops!

And I just found out that J.K. Rowling received 17 rejections before getting a publishing contract for Harry Potter. I’d be beside myself if I received that many rejections!

THIS will be the one!

Joined a writing organization. Attended a conference. I walked around with my nametag, but hardly anyone talked to me. I was afraid to talk to other people because I was too vain to wear my glasses so I couldn’t see anyone’s names. The workshops made me realize all the things I was doing wrong. The keynotes made me cry. I returned home overwhelmed.

Joined a critique group. They tore my manuscript apart. I argued every point they made. Then I slumped home, and vented to anyone with a pulse. And ate a pint of ice cream. After a few days, some of their critiques made sense. Secretly, I knew they were better writers than me.

Many manuscripts, blog posts, how-to books, critique sessions, and conferences later, and I’m getting the hang of this whole writing, revising, critiquing, and querying process. I've also read a bunch of books in my genre. And I’ve found a social networking balance. Now others ask me for advice, which fills me with pride. Each time I write a new piece, it’s better than the last one. This dream may happen tomorrow or next year, but it will happen. I no longer feel like a poseur.

I am a writer.

"Publishing a book is not a race where the winners come in first. It’s not important WHEN you finish, just that you DO. Oh, and one more thing: Your journey is your own. It won’t look or feel like mine. It shouldn’t. Don’t compare journeys. Just be grateful you can take one more step."

(P.S. Enter to win a copy of Possession by Elana Johnson HERE!)

Writers, which step has been the most difficult one for you?

(P.P.S. Yes, those are my kids walking up the Lincoln Memorial steps last summer.)

Posted by Theresa Milstein at 2:55 AM