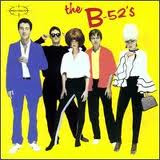 I'm happy to see they've dropped the apostrophe on their website.
“Hop in my Chrysler, it’s as big as a whale

And it’s about to set sail

I got me a car, it seats twenty

So come on and bring your jukebox money”

I just saw them in concert for the first time last year, which made me feel young and old at the same time. Young because many of the concertgoers were older than me. Maybe they were in high school and college when the band hit the scene? But let’s face it, when some of those people are bringing their kids (who are teenagers) along…

The B52s was whacky and fun. Their songs had no deep message. The women had HIGH hair. The man’s talking voice cut into the songs in a strange way.

I remember going to Phase II Pizza in Northport, NY where I grew up. Each table had mini jukeboxes. Whatever you put a quarter in to play, every other table had to hear. My friend and I put in a dollar’s worth of Rock Lobster and were then hysterical as the song played over and over.

This song is actually very pretty:

Here’s how they looked when I saw them in concert.
A mix of mod, punk, pop, and dance music, what wasn't to love?

Posted by Theresa Milstein at 2:31 AM