V is for Violent Femmes 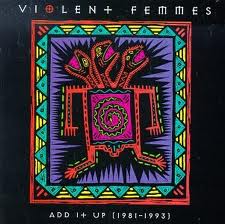 I hear “Blister in the Sun” by the Violent Femmes so often, I wonder if people in their teens and 20s think the song is more recent.  The song came out in 1983, but the album (which also had “Gone Daddy Gone”) didn’t go platinum until 9 years later.


Here they are live in the early years.  Cute lead singer:


And here’s Angela from the TV show “My So Called Life” (in 1995) thinking she’s over her crush, Jordan Catalano.  What does one do after such an epiphany?  Dance to “Blister in the Sun” of course:

This “Blister in the Sun” video shows clips from Grosse Point Blank, which came out in 1997 (I’ve loved John Cusack since “16 Candles”, but especially since “Better off Dead”):

The band pretty much lasted until 2007 when there was a lawsuit between band members over selling the song for a Wendy’s commercial.

Yeah, I don’t think it works either:

FYI: ABNA Quarter Finals were announced yesterday.  YA started at 5k.  The last round was 250.  But I got cut when it just went to 50.  The NE-SCBWI conference was just this past weekend.  It was the best yet.  I got a request for two partials and I received some feedback from my critique partners the novel academy and the ABNA reviewer at Publishers Weekly, which should make my novel Naked Eye stronger.  I’ll edit the manuscript again, and will query soon.

Posted by Theresa Milstein at 2:46 AM