S is for Sting 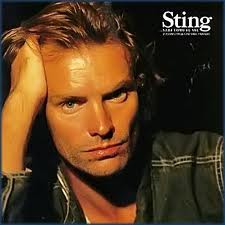 I had another huge list of musicians.  It was nearly impossible to choose:
Siousxie and the Banshees, Simple Minds, Simply Red, The Smiths, Spandau Ballet, Sting, Suicidal Tendencies, Sonic Youth, Sisters of Mercy, The Smithereens, Squeeze

It was hard not to pick Siouxsie and the Banshees. I had their posters.  I listened to their records. I saw them in concert.

But I had to pick Sting.  The Police was one of the first bands I was aware of way back in junior high (the old fashioned version of middle school).  And Sting was hot—I was aware of it then, even though John Taylor and Simon Le Bon had my heart.


“Every Breath You Take” was the perfect song to listen to as my parents separated:


I remember buying a 45 (look it up, kiddos) that had the B side of “Drive to Tears” on it, which gave a hint of the Sting , the solo artist we’d get in the future:

(Oh man, is he hot.  I didn’t appreciate it enough then.)

I still love this video “Wrapped Around Your Finger”, which would’ve been a perfect wedding song.  Beautiful video too:

Here’s a bio about Sting, where you can read about all his music and causes.  I like that he’s been a big advocate of the environment and other causes.  (Remember him in the Band Aid video?)  He even helped Crusty the Clown:

I don’t care he’s been made fun of for being pretentious.  He was an English teacher.  Nothing wrong with intelligent lyrics.  Others don’t agree with me. Link HERE.

I remember after September 11th, I worked at GEICO and they asked for volunteers during the benefit concert.  I took calls for donations while the concert played on TV screens around the floor.  Sting sang “Fragile”, which was perfect for how Americans were feeling:

On and on the rain will fall

Posted by Theresa Milstein at 4:16 AM