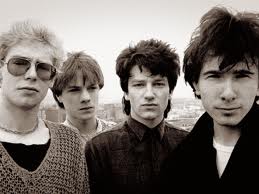 When I decided to do an A to Z Challenge about 80s music,
it was mostly for this band.

U2 has been my constant for so long.  I don’t know what year I picked up the record album October, which had the song “Gloria”, which I immediately loved.  I don’t know if the album War was even out yet or had just come out.  I was hooked.  Through all phases of pop, new wave, and alternative, U2 was always there.  I loved them most of all because they stood for something.  It wasn’t just about music, but what music could do to make the world a better place.

Bono has been with his wife since 1975.  Few musicians can boast that.  He was a role model to me back in the 1980s, and I still respect him.  He’s Irish, I’m half-Irish.  If I can’t marry him, then it would be nice if we were distantly related.

I didn’t see them in concert until 1997, at a stadium outside in New Jersey.  (The Meadowlands?)  I drove there with two friends from graduate school and it was the first time I’d driven through Manhattan.  We survived.  It was worth it.

Every time they come around, they play at enormous stadiums for enormous ticket prices.  I’d love to see them again.  If I could see only one more band play live, I’d want it to be U2.

In junior high, I played The Unforgettable Fire album constantly.  In high school, I may have even played The Joshua tree even more.

U2 performing at Live Aid.  “Bad” is one of my favorite songs.  Ever:


“Pride (In the Name of Love)” is a wonderful tribute to Martin Luther King Jr.:


And here’s a nod to The Beatles playing on the roof from “Let it Be”:

I probably have more songs from U2 on my iPod than any other group or artist.  Unlike many bands from the 1980s, they still create music people listen to, influencing a few generations.  Their 2004 album was popular enough to have a song featured in the iPod commercials:


U2’s last release was in 2007, so I hope they have something coming out soon.  I hope they play forever.  I can’t imagine U2 in the past tense. 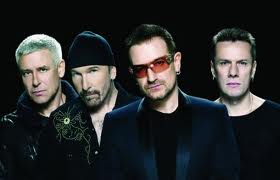 P.S.  Aubrie Dionne is featuring me today on her blog.

Posted by Theresa Milstein at 2:32 AM