T is for Talking Heads (and Truth Giveaway)

This was another tough choice.  Tears for Fears had a couple of really big hits.  Twisted Sister’s  “We’re Not Gonna Take It” was a fun video.  ‘Til Tuesday’s “Voices Carry” was an excellent song and I liked the video.

“Burning Down the House” was a cool song:

So was “Psycho Killer” (a very cute guy in my school did an acoustic version of this song in the high school talent show), which is shown here live:

It didn’t matter that some of the songs were from the 1970s.  (Just like Queen) Showing their videos on MTV game them new life and a new audience.

Then they released “And She was”, which appealed to people like my dad.  The video was innovative for its time (like Peter Gabriel’s “Big Time”):


They were a cool band.  I still listen to their older songs.

“Love in an ocean, I can’t forget
My sweet sixteen, I would never regret
I wanna know, can you tell me?
I love to stay
Take me to the river, drop me in the water”

- “Take Me to the River” Talking Heads 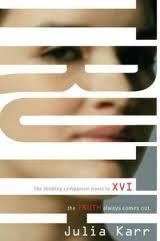 If you want to win an ARC of Truth (sequel to XVI) by Julia Karr, just leave a comment telling me so and also let me know where you shared this post (Facebook, Twitter, blogpost).  I’ll announce the winner on the A to Z Challenge reflections post.   (Open to international residents.)

Posted by Theresa Milstein at 2:26 AM